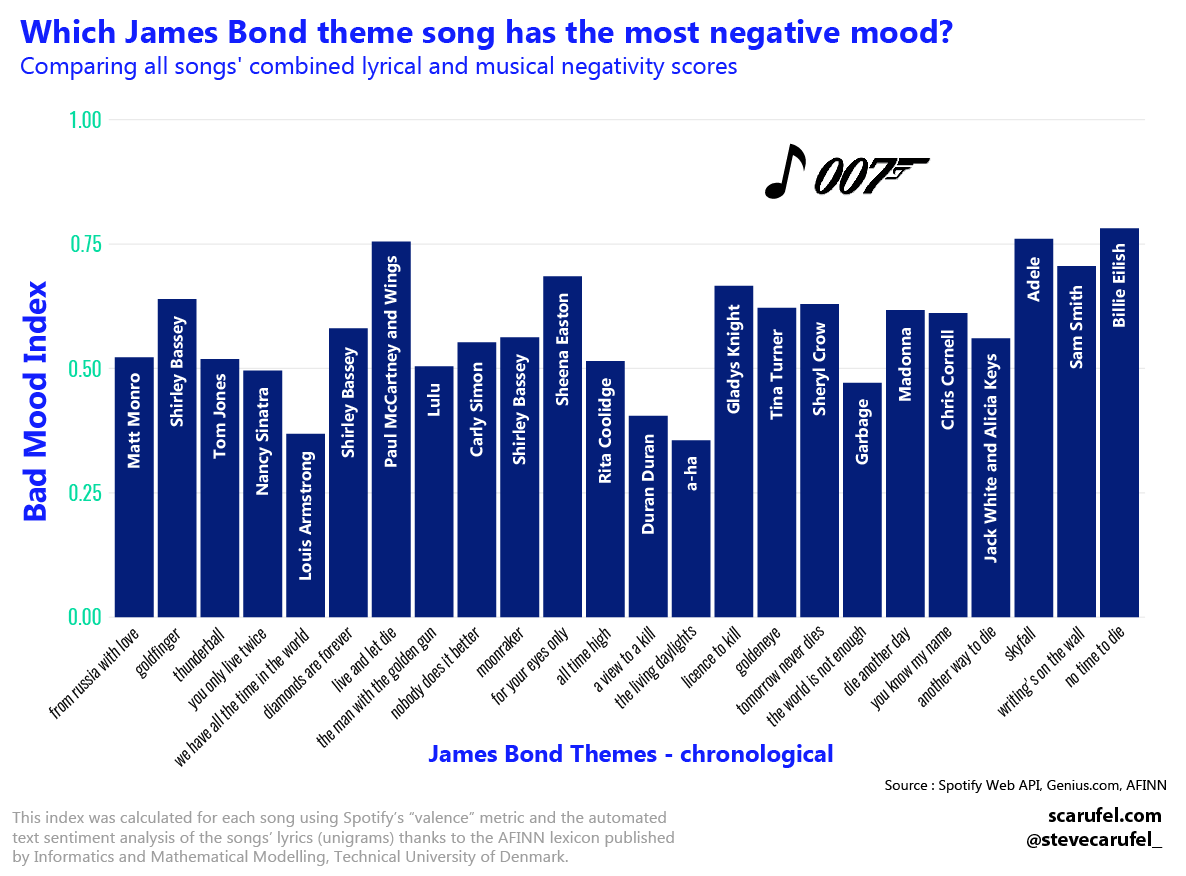 So here I am to help you cope with the further postponing of No Time To Die, James Bond‘s next adventure that was initially supposed to be in theaters in April 2020.

As a big fan of music and the movie franchise, I analyzed the mood of all official songs using Spotify’s very convenient audio features data and the lyrics of each song thanks to Genius.com.

Excluding the very first theme track which is instrumental, I carried a sentiment analysis using Spotify’s audio features for each track (mostly the “valence” metric, which measures how positive or negative a track sounds) combined with a text sentiment analysis thanks to Genius.com for the lyrics.

Somewhat not surprisingly, the latest official track, Billie Eilish’s No Time To Die, has the most negative mood overall.

Still, not by much. For some reason, the lastest three songs sound very gloomy. Note that Paul McCartney’s musical take on the franchise has a high Bad Mood Index too.

But using another text analysis database, I could look at the more specific sentiments that are anger, joy, sadness, and trust. Of course, it doesn’t divert much from what we’ve already seen. 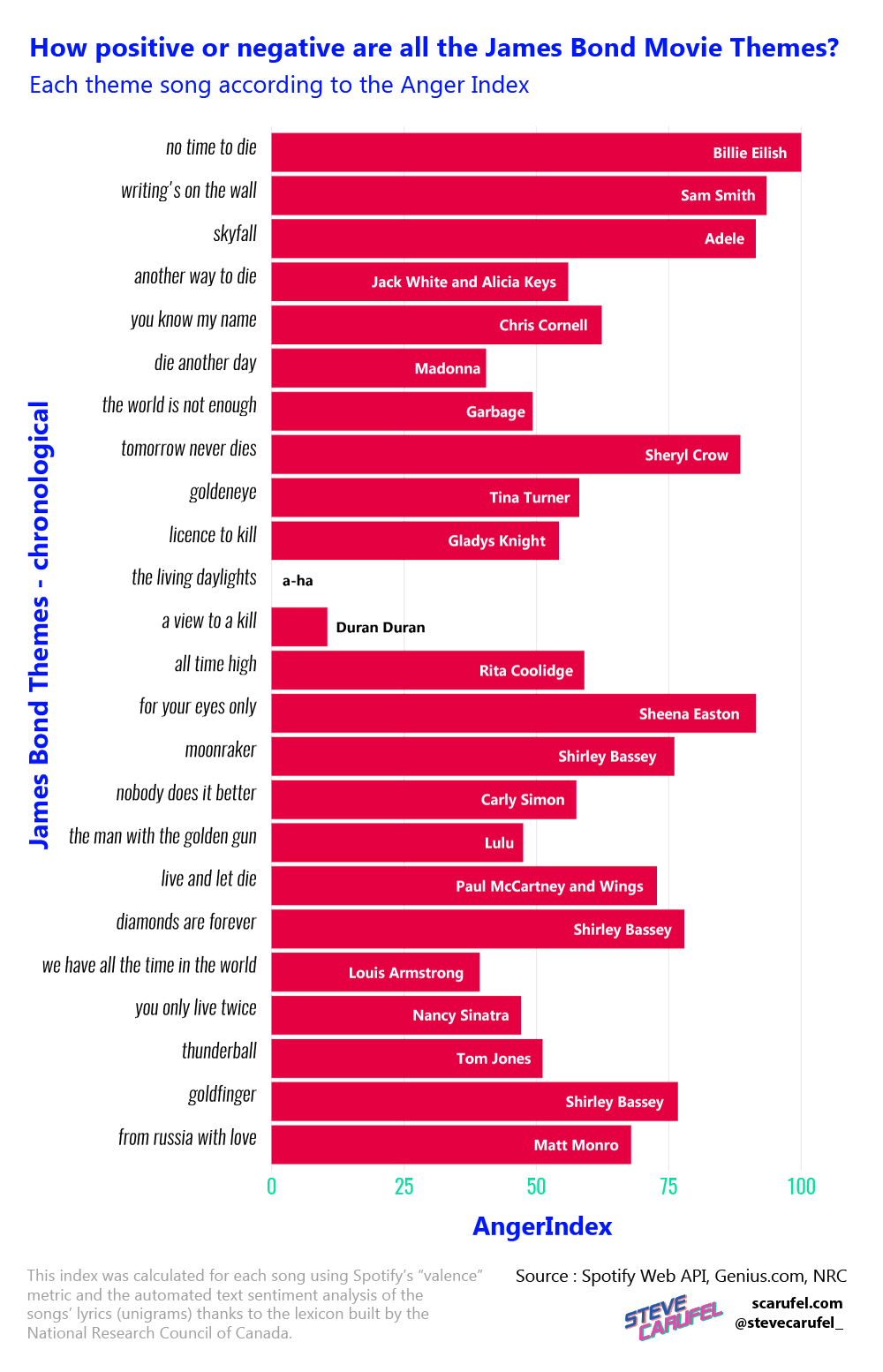 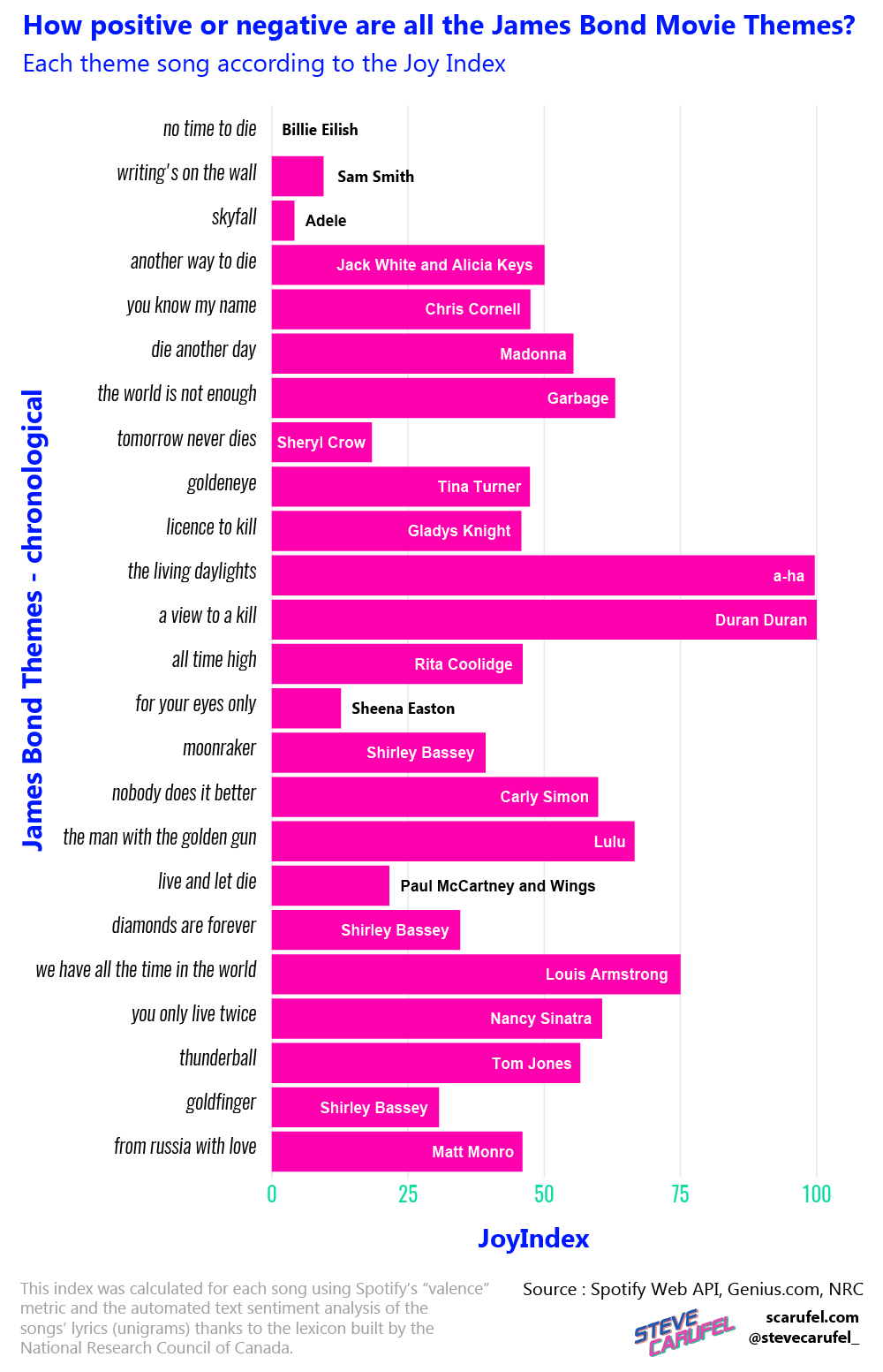 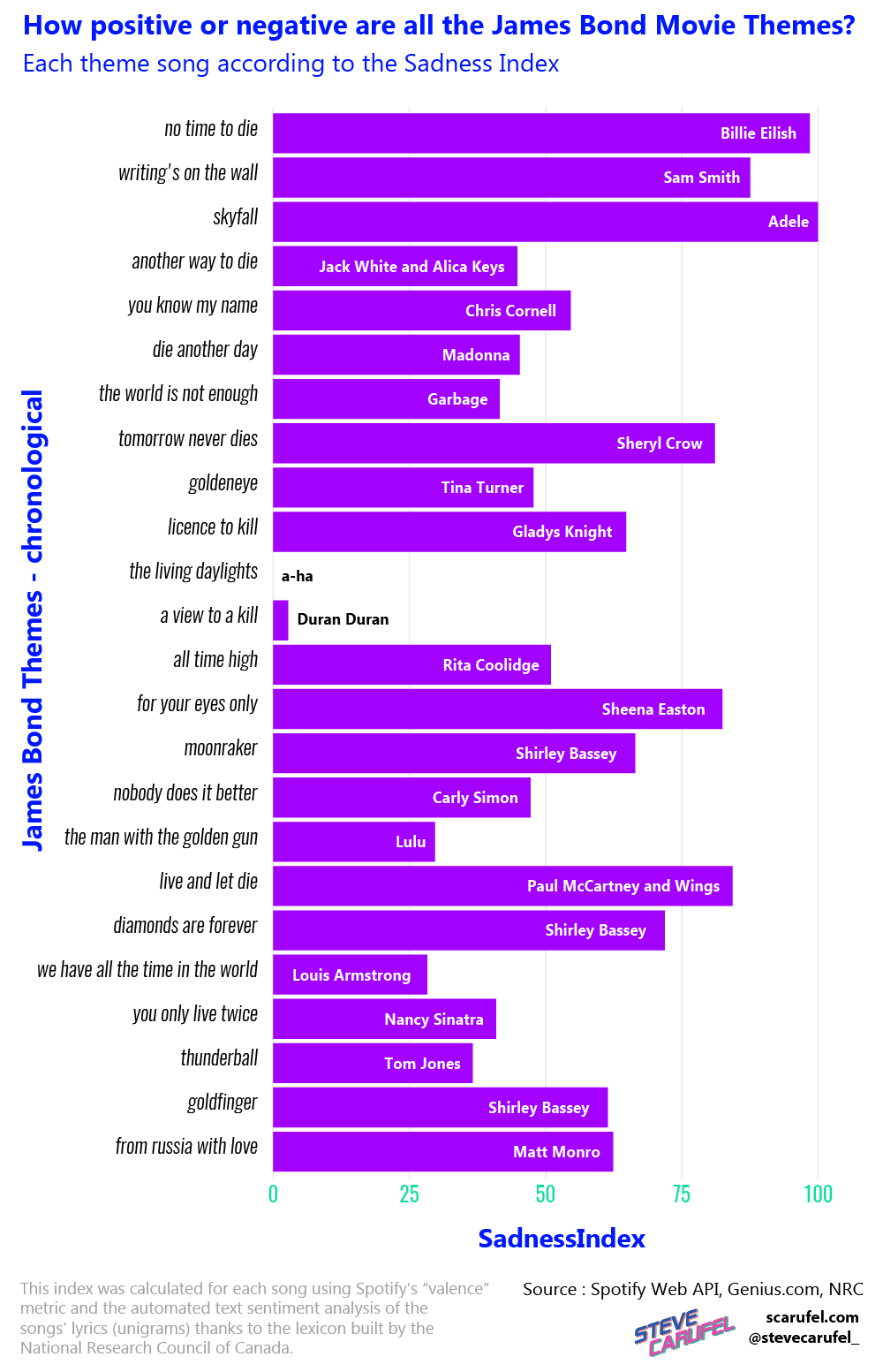 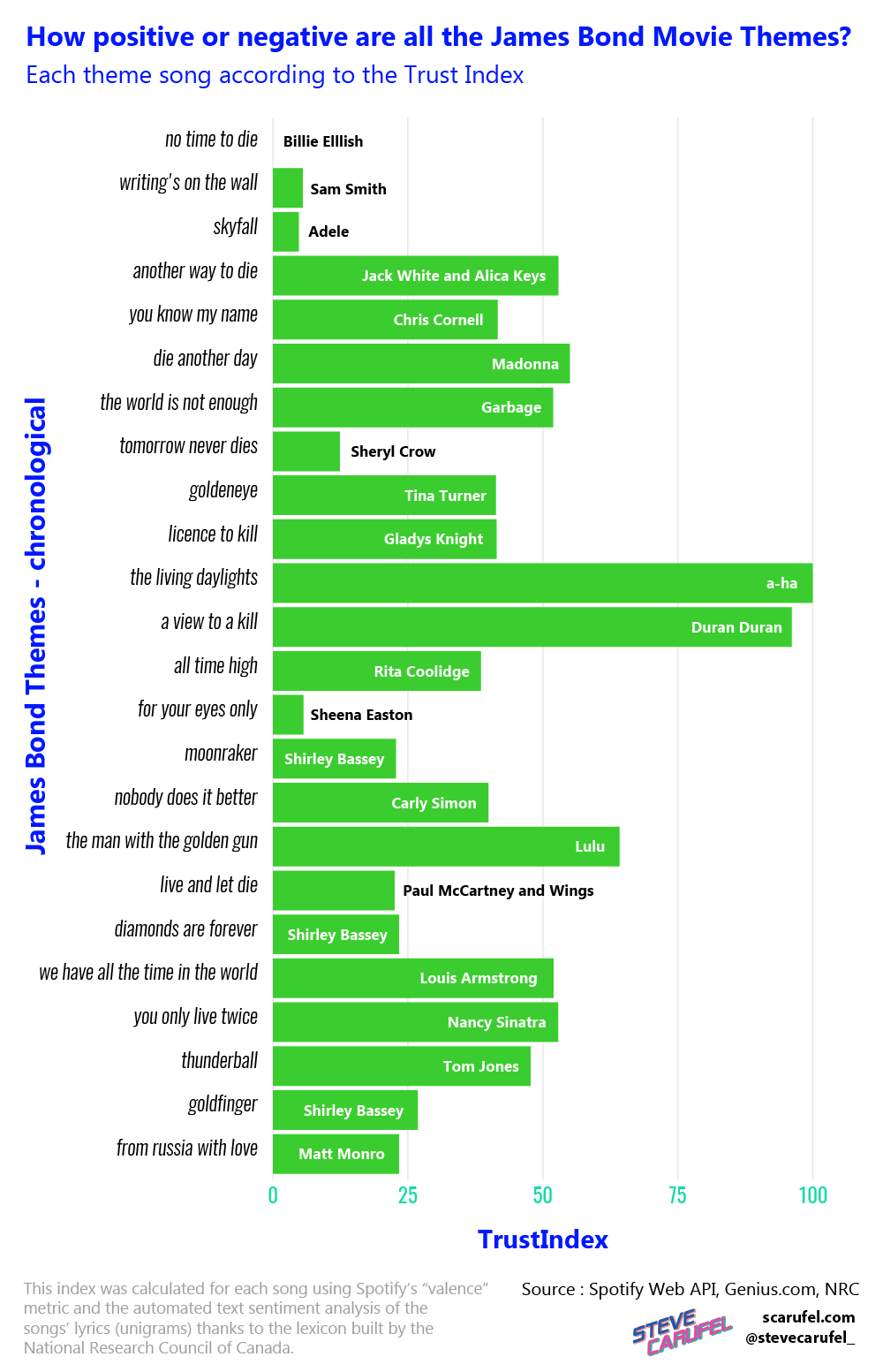 Billie Eilish really didn’t trust anyone when she was writing her song.

The text analysis part was possible thanks to the AFINN lexicon published by Informatics and Mathematical Modelling, Technical University of Denmark, a database attributing absolute positivity or negativity to words.

It was possible to calculate the Bad Mood Index by having both musical and lyrical data on the same scale (here 0 for positive, 1 for negative) and calculating the mean.

You can find my annotated R script in my GitHub repository, along with the blog posts and resources that inspired or helped this analysis. https://github.com/datacarvel/JamesBondThemes